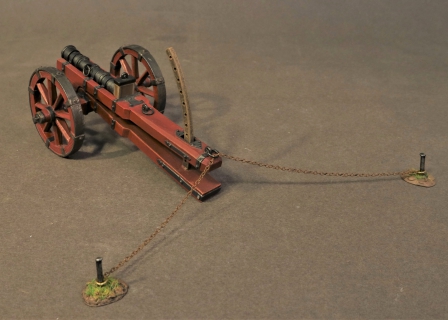 Because one pound of powder was required to throw nine pounds of shot,
and because the barrel had to be washed
with a mixture of water and vinegar after every firing,
ten shots per hour was considered a good rate of fire.
During the Wars of the Roses,
this slow rate meant that cannon were used mainly on the eve
or at the start of a battle,
firing one volley at the enemy before the hand-to-hand combat commenced.
Experts in medieval gunnery suspect that the artillery
played a role at the beginning of the battle- but
may have become less useful tactically as the battle progressed.
It was notoriously difficult to turn
the artillery pieces round to face new directions - so
adapting to the progress of the battle
would have been difficult for these early gunners.
Their artillery pieces and carriages would probably
have weighed between 400 and 1000 kilos each.

Cannon appears to have been used extensively
by both sides at the Battle of Bosworth Field.
The present position of the battlefield is based
on the discovery in a field by Fenn Lane Farm
of a large quantity of battle relics including many cannon balls.
One account mentions 140 cannon,
while the archaeological searches of the battlefield
have found more than 30 cannonshot - more than
any other discovered on a European medieval battlefield.