BATTLE ON THE MONONGAHELA 1755
WOODLAND INDIANS 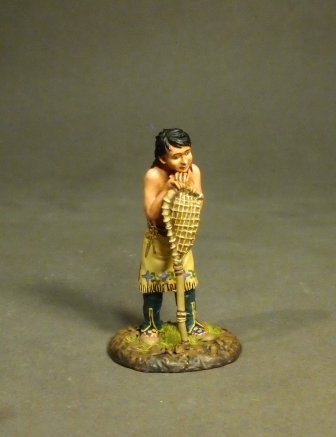 
Lacrosse has its origins in a tribal game played
by eastern Woodlands Native Americans and by some Plains Indians tribes in what is now Canada.
The game began with the ball being tossed into the air and the two sides rushing to catch it.
Because of the large number of players involved,
these games generally tended to involve a huge mob of players swarming the ball and slowly moving across the field.
Passing the ball was thought of as a trick, and it was seen as cowardly to dodge an opponent.

Lacrosse is one of the oldest team sports in North America.
There is evidence that a version of lacrosse originated in what is now Canada as early as the 17th century
Traditional lacrosse games were sometimes major events that could last several days.
As many as 100 to 1,000 men from opposing villages or tribes would participate.
The games were played in open plains located between the two villages,
and the goals could range from 500 yards ,to 6 miles apart!


There are traditionally three areas of scoring on the stickball pole.
There is a mark, about chest high on the pole, and when scored above, awards one point.
Contact below that point is not scored.
The top half of the pole, well above arms reach,
is worth two points when hit.
The very top of the pole,
usually embellished with a large figure of a fish, is worth three points.
In recreational games, scoring is loosely kept, most times by the audience or a few players.
Games typically reach around twenty points before concluding
Lacrosse traditionally had many different purposes.
Some games were played to settle inter-tribal disputes.
This function was essential to keeping the Six Nations of the Iroquois together.
Lacrosse was also played to toughen young warriors for combat,
for recreation, as part of festivals, and for the bets involved.