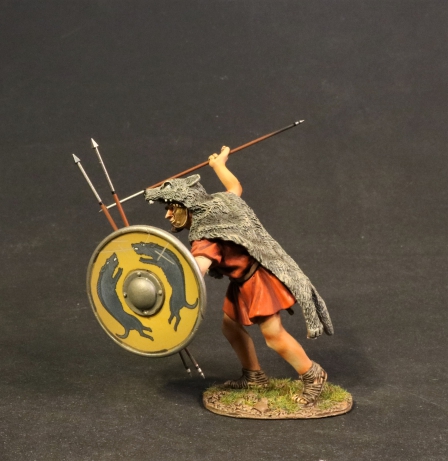 In the legion, the velites were attached to each maniple of hastati, principes and triarii.
They usually formed up at the front of the legion before battle to harass
the enemy with javelin throws and to prevent the enemy doing the same
before retiring behind the lines to allow the heavier infantry to attack.
After they had fallen back, they would move up behind the attacking troops and throw darts at the enemy.
They also sometimes carried wounded back to the rear,
however usually a corps of deportates did this.
In a pitched battle,
the velites would form up at the front of the legion and cover the advance of the hastati,
who were armed with swords.

In the standard legion around the time of the Second Punic War (218 -201 BC)
there were 10 maniples of hastati, each having 120 hastati, with 40 velites attached.
The maniples were further split into centuries, of 60 hastati and 20 velites,
with the centurion of the hastati century commanding the velites as well.

When the Romans set up a temporary castra, two maniples (without their velites)
were selected to pitch the tents of the headquarters and officers,
and details were made for fatigue duty, to get wood and water,
and to give food and water to the animals accompanying them.
The rest of the men, excepting velites and officers,
set up the tents of the soldiers.
During this time the velites would guard the outside of the wall and the wall itself,
while the rest of the troops would guard the interior.
The watch, which was composed of eight men led by a decurion,
ran from 6:00 am to 6:00 pm, and was divided into four shifts, each of three hours.