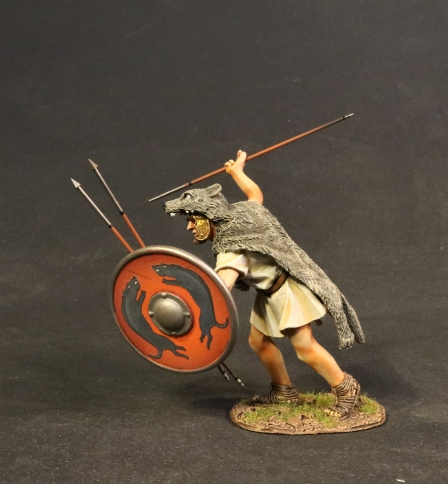 Hastati (singular: Hastatus) were a class of infantry employed in the armies of the early and Mid Roman Republic.
They were originally some of the poorest men in the legion,
and could afford only modest equipment.
Later, the hastati contained the younger men rather than just the poorer, (though most men of their age were relatively poor.)
Their usual position was the first battle line.
The hastati were formed into 10 maniples of 120 men each, therefore 1,200 men per legion.
Battles were conducted in a similar fashion;
the velites would gather at the front and fling javelins to cover the advance of the hastati.
If the hastati failed to break the enemy, they would fall back on the principes.
If the principes could not break the enemy, they would retire behind the triarii, who would then engage.

Velites were the youngest and usually the poorest
(being fifth class citizens, with property worth 400-2,500 denarii) soldiers in the legion,
and could rarely afford much equipment. They were armed with veretum,
light javelins, each with a 90 cm (3 ft) wooden shaft the diameter of a finger, with a c. 10-inch (25 cm)
narrow metal point, and tips designed to bend on impact to prevent them being thrown back,
similar to the heavier pila of other legionaries.
Livy says that they each carried seven javelins,
however Roman satirist Lucilius says that they carried five,
suggesting that the amount may have changed.
The hastati and principes carried gladii,
relatively short thrusting swords 74 centimetres (29 inches) in length,
as their main weapons, and the velites carried them as backup weapons.
They fought in a very loose, staggered formation like most irregular troops,
and carried small round shields called parma, 90 cm (3 feet) in diameter.
The velites were placed at the front of the maniples,
so that the velites had the chance to prove themselves and win glory by seeking out single combat with an enemy.
This is also why they wore highly identifiable wolfskin headdresses.