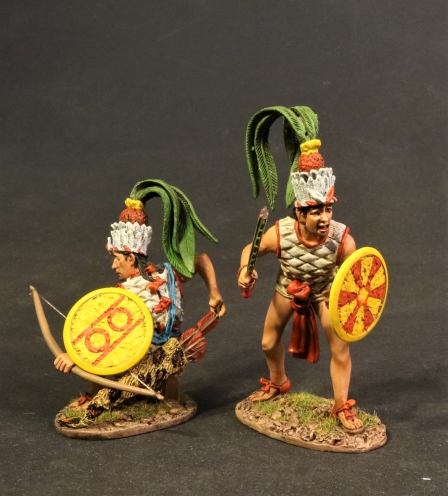 Many sources depict high status warriors wearing the distinctive back ornaments of their communities.
The great white heron represented the house of Tizatlan.
The "Tlahuiztli" is covered in large yellow feathers,
s and the warrior wears the red and white headband which was an attribute of Tlaxcallan nationality.


The Tlaxcalans, or Talaxcaltecs,
are an indigenous group of Nahua ethnicity who inhabited the republic of Tlaxcala and present-day Mexican state of Tlaxcala.
Despite early attempts by the Mexica,
the Tlaxcalteca were never conquered by the Aztec Triple Alliance.
The Aztecs allowed them to maintain their independence so that they could participate in the xochiyaoyatl
(flower wars) with them to facilitate human sacrifice The Tlaxcaltecs served as allies to Hernán Cortés and his fellow Spanish conquistadors,
and were instrumental in the invasion of Tenochtitlan,
capital of the Aztec empire,
helping the Spanish reach the Valley of Anahuac and providing a key contingent of the invasion force.