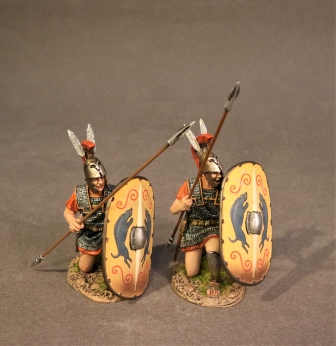 
For set-piece battles, the heavy infantry were usually drawn up in three lines.
However, the vast majority of the heavy infantry
were stationed in the front two lines, the HASTATI and PRINCIPES.
Contained in these two lines were the younger recruits
who were expected to do all the fighting.
The rear line (TRIARII), was a reserve consisting of older men
who formed a line of last resort to provide cover for the front lines
if they were put to flight (and also to prevent unauthorised retreat by the front ranks).
The three lines of maniples were drawn up in a chessboard pattern
(dubbed quincunx by modern historians,
after the Latin for the "5" on a dice-cube, whose dots are so arranged).
In front of these three lines of heavy infantry,
would be stationed the legion's VELITES.

The Roman Republic was the era o classical Roman civilization
beginning with the overthrow of the Roman Kingdom,
traditionally dated to 509 BC,
and ending in 27 BC with the establishment of the Roman Empire.
It was during this period that Rome's control expanded
from the city's immediate surroundings to hegemony
over the entire Mediterranean world.

Roman government was headed by two consuls,
elected annually by the citizens and advised
by a senate composed of appointed magistrates.
As Roman society was very hierarchical by modern standards,
the evolution of the Roman government was heavily
influenced by the struggle between the patricians,
Rome's land-holding aristocracy,
who traced their ancestry to the founding of Rome,
and the plebeians, the far more numerous citizen-commoners.
Over time, the laws that gave patricians
exclusive rights to Rome's highest offices were repealed or weakened,
and leading plebeian families became full members of the aristocracy.
The leaders of the Republic developed a strong tradition
and morality requiring public service and patronage
in peace and war, making military
and political success inextricably linked.
Many of Rome's legal and legislative structures
(later codified into the Justinian Code,
and again into the Napoleonic Code)
can still be observed throughout Europe
and much of the world in modern nation states an international organizations.

During the first two centuries of its existence,
the Roman Republic expanded through a combination of conquest and alliance,
from central Italy to the entire Italian peninsula.
By the following century, it included North Africa,
most of the Iberian Peninsula, and what is now southern France.
Two centuries after that,
towards the end of the 1st century BC,
it included the rest of modern France, Greece,
and much of the eastern Mediterranean.
By this time, internal tensions
led to a series of civil wars, culminating with the assassination of Julius Caesar,
which led to the transition from republic to empire.

Historians have variously proposed Julius Caesar's crossing
of the Rubicon River in 49 BC,
Caesar's appointment as dictator for life in 44 BC,
and the defeat of Mark Antony
and Cleopatra at the Battle of Actium in 31 BC.
However, most use the same date as did the ancient Romans themselves,
the Roman Senate's grant of
extraordinary powers to Octavian and his adopting the title Augustus in 27 BC,
as the defining even ending the Republic.