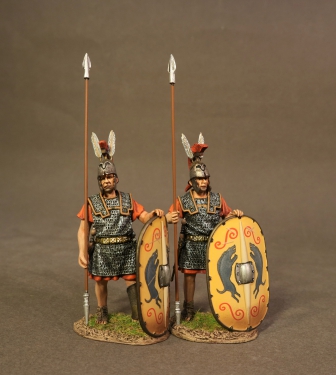 
For set-piece battles, the heavy infantry were usually drawn up in three lines.
However, the vast majority of the heavy infantry
were stationed in the front two lines, the HASTATI and PRINCIPES.
Contained in these two lines were the younger recruits
who were expected to do all the fighting.
The rear line (TRIARII), was a reserve consisting of older men
who formed a line of last resort to provide cover for the front lines
if they were put to flight (and also to prevent unauthorised retreat by the front ranks).
The three lines of maniples were drawn up in a chessboard pattern
(dubbed quincunx by modern historians,
after the Latin for the "5" on a dice-cube, whose dots are so arranged).
In front of these three lines of heavy infantry,
would be stationed the legion's VELITES.