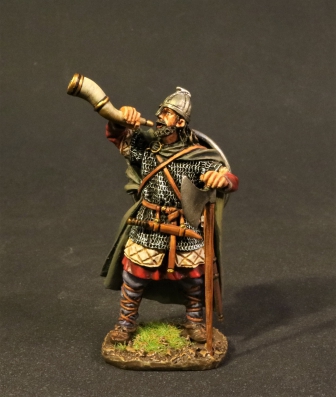 The death of King Edward the Confessor of England in January 1066
had triggered a succession struggle in which a variety of contenders from
across north-western Europe fought for the English throne.
These claimants included the King of Norway, Harald Hardrada.

The Battle of Stamford Bridge took place at the village of Stamford Bridge,
East Riding of Yorkshire, in England on 25 September 1066,
between an English army under King Harold Godwinson and an invading Norwegian force led
by King Harald Hardrada and the English king's brother Tostig Godwinson.
After a bloody battle, both Hardrada and Tostig along with most of the Norwegians were killed.
The battle has traditionally been presented as symbolising the end of the Viking Age.

Harold's victory over the invading Viking army was short-lived.
Three days after the battle at Stamford Bridge, on 28 September,
a second invasion army led by William, Duke of Normandy, landed in Pevensey Bay, Sussex, on the south coast of England.
Harold had to immediately turn his troops around and force-march them southwards to intercept the Norman army.
Less than three weeks after Stamford Bridge, on 14 October 1066,
the English army was decisively defeated and King Harold II fell in action at the Battle of Hastings,
beginning the Norman conquest of England.

Leofwine Godwinson (c.1305 -14th October 1066)
was a younger brother of King Harold Godwinson.
Following the death of their father the Earl of Godwin,
the Godwinsons managed to retain their hold on England.
Harold inherited the Earldom of Wessex.
Gyrth held the Earldoms of East Anglia, Cambridgeshire and Oxfordshire.
Leofwine was made Earl of Kent, Essex, Middlesex, Hertford,
Surrey and probably Buckinghamshire.

Leofwine Godwinson was killed at the Battle of Hastings alongside his brothers Harold and Gyrth.