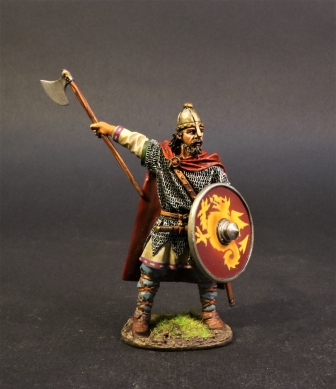 The death of King Edward the Confessor of England in January 1066
had triggered a succession struggle in which a variety of contenders from
across north-western Europe fought for the English throne.
These claimants included the King of Norway, Harald Hardrada.

The Battle of Stamford Bridge took place at the village of Stamford Bridge,
East Riding of Yorkshire, in England on 25 September 1066,
between an English army under King Harold Godwinson and an invading Norwegian force led
by King Harald Hardrada and the English king's brother Tostig Godwinson.
After a bloody battle, both Hardrada and Tostig along with most of the Norwegians were killed.
The battle has traditionally been presented as symbolising the end of the Viking Age.

Harold's victory over the invading Viking army was short-lived.
Three days after the battle at Stamford Bridge, on 28 September,
a second invasion army led by William, Duke of Normandy, landed in Pevensey Bay, Sussex, on the south coast of England.
Harold had to immediately turn his troops around and force-march them southwards to intercept the Norman army.
Less than three weeks after Stamford Bridge, on 14 October 1066,
the English army was decisively defeated and King Harold II fell in action at the Battle of Hastings,
beginning the Norman conquest of England.

Harold Godwinson (c.1022 - 14 October 1066), often called Harold II,
was the last crowned Anglo-Saxon king of England.
Harold reigned from 6 January 1066 until his death at the Battle of Hastings,
fighting the Norman invaders led by William the Conqueror during the Norman conquest of England.
His death marked the end of Anglo-Saxon rule over England.
Harold was a powerful earl and member of a prominent Anglo-Saxon family with ties to Cnut the Great.
Upon the death of his brother-in-law King Edward the Confessor on 5 January 1066,
the Witenagemot convened and chose Harold to succeed;
he was the first English monarch to be crowned in Westminster Abbey.
In late September, he successfully repelled an invasion by rival claimant Harald Hardrada of Norway
before marching his army back south to meet William the Conqueror at Hastings two weeks later.

The Anglo Saxon/Danish army's standard infantry battle formation throughout this era was the shield wall.
The "bord-weal" or "scyld-burh".
The whole army formed up in one massive phalanx several ranks deep.
Though there were attempts at outflanking or turning flanks there was basically an absence of tactics.
Volleys of spears, javelins and arrows opened a battle,
but once shield walls collided it was merely might,
determination and often numbers which decided the day, the loser generally suffering considerably in the rout.
The coreof the army was made up of the Fyrd.
The Fyrd or levy of the common people may have come from the old Germanic custom
that all fit men had to be ready to serve in war when the need arose.