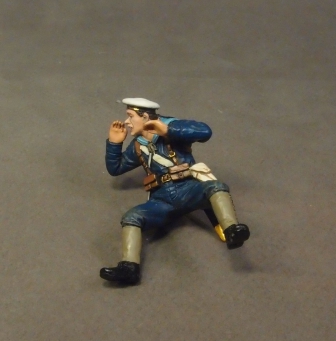 
The Naval Brigade was a generic term used to define a body of Seamen,
and Royal Marines, drawn from their ships
and landed for active service under the orders of an army commander.
Numbers were immaterial and it did not relate to an army Brigade.
Often it would not even be of battalion strength.

Generally the armament of the Naval Brigade was made up of
what was available from the parent ships, from where the Brigade was drawn.

The Gatling gun or its variants was the main weapon of
the Naval Brigade in Egypt and the Sudan.

The original Gatling gun was a field weapon,
which used multiple rotating barrels turned by a hand crank,
and firing loose (no links or belt) metal cartridge ammunition
using a gravity feed system from a hopper.
The Gatling gun's innovation lay neither in the rotating mechanism,
nor the use of multiple barrels to limit overheating ,
rather, the innovation was the gravity feed reloading mechanism,
which allowed unskilled operators to
achieve a relatively high rate of fire of 200 rounds per minute.