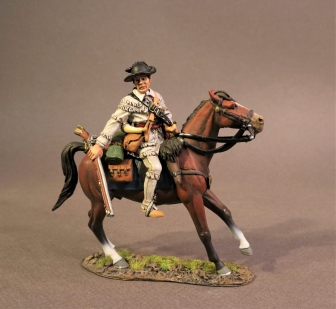 The Continental Army was formed by the Second Continental Congress
after the outbreak of the American Revolutionary War by the colonies that became the United States of America.
Established by a resolution of the Congress on June 14, 1775,
it was created to coordinate the military efforts of the Thirteen Colonies
in their revolt against the rule of Great Britain.
The Continental Army was supplemented by local militias
and troops that remained under control of the individual states or were otherwise independent.
General George Washington was the commander-in-chief of the army throughout the war.

The Continental Army consisted of soldiers from all 13 colonies and,
after 1776, from all 13 states.
When the American Revolutionary War began at the Battles of Lexington and Concord on April 19, 1775,
the colonial revolutionaries did not have an army.
Previously, each colony had relied upon the militia,
made up of part-time citizen-soldiers, for local defense,
or the raising of temporary "provincial regiments"
during specific crises such as the French and Indian War of 1754–63.
As tensions with Great Britain increased in the years leading to the war,
colonists began to reform their militias in preparation for the perceived potential conflict.
Training of militiamen increased after the passage of the Intolerable Acts in 1774.
Colonists such as Richard Henry Lee proposed forming a national militia force,
but the First Continental Congress rejected the idea.

The Continental Army of 1777–80 evolved out of several critical reforms and political decisions
that came about when it became apparent that the British were sending massive forces to put an end to the American Revolution.
The Continental Congress passed the "Eighty-eight Battalion Resolve",
ordering each state to contribute one-battalion regiments in proportion to their population,
and Washington subsequently received authority to raise an additional 16 battalions.
Enlistment terms extended to three years or to "the length of the war" to avoid the year-end crises that depleted forces
(including the notable near-collapse of the army at the end of 1776,
which could have ended the war in a Continental, or American, loss by forfeit).

Three of the Continental Army units which took part in
the assault on the Breymann Redoubt, were the 2nd Massachussetts,
The 2nd New York, and The 1st Canadian Regiment.

Daniel Morgan (July 6, 1736 - July 6, 1802) was an American pioneer,
soldier, and politician from Virginia.
One of the most gifted battlefield tacticians of
the American Revolutionary War (1775-1783),
he later commanded troops during the suppression of the Whiskey Rebellion (1791-1794).
Born in New Jersey to Welsh immigrants, Morgan settled in Winchester,
Virginia. He became an officer of the Virginia militia and
recruited a company of soldiers at the start of the Revolutionary War.
Early in the war, Morgan served in Benedict Arnold's expedition to Quebec
and in the Saratoga campaign.
He also served in the Philadelphia campaign but resigned from the army in 1779.

Morgan returned to the army after the Battle of Camden,
and led the Continental Army to victory in the Battle of Cowpens.
After the war, Morgan retired from the army again and developed a large estate.
He was recalled to duty in 1794 to help suppress the Whiskey Rebellion,
and commanded a portion of the army that remained
in Western Pennsylvania after the rebellion.
A member of the Federalist Party, Morgan twice ran
for the United States House of Representatives, winning election to the House in 1796.
He retired from Congress in 1799 and died in 1802.