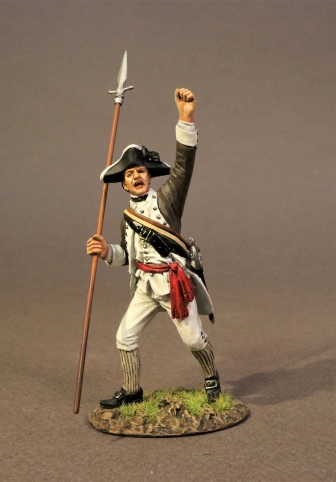 
The Continental Army was formed by the Second Continental Congress after the outbreak of
the American Revolutionary War by the colonies that became the United States of America.
Established by a resolution of the Congress on June 14, 1775,
it was created to coordinate the military efforts of the Thirteen Colonies in their revolt against the rule of Great Britain.
The Continental Army was supplemented by local militias
and troops that remained under control of the individual states or were otherwise independent.
General George Washington was the commander-in-chief of the army throughout the war.
The Continental Army consisted of soldiers from all 13 colonies and,
after 1776, from all 13 states.
When the American Revolutionary War began at the Battles of Lexington and Concord on April 19,
1775, the colonial revolutionaries did not have an army.
Previously, each colony had relied upon the militia,
made up of part-time citizen-soldiers,
for local defense, or the raising of temporary "provincial regiments"
during specific crises such as the French and Indian War of 1754-63.
As tensions with Great Britain increased in the years leading to the war,
colonists began to reform their militias in preparation for the perceived potential conflict.
Training of militiamen increased after the passage of the Intolerable Acts in 1774.
Colonists such as Richard Henry Lee proposed forming a national militia force,
but theÂ First Continental Congress rejected the idea.

The Continental Army of 1777-80 evolved out of several critical
reforms and political decisions that came about when it became apparent
that the British were sending massive forces to put an end to the American Revolution.
The Continental Congress passed the "Eighty-eight Battalion Resolve",
ordering each state to contribute one-battalion regiments in proportion to their population,
and Washington subsequently received authority to raise an additional 16 battalions.
Enlistment terms extended to three years or to "the length of the war"
to avoid the year-end crises that depleted forces (including the notable near-collapse of the army at the end of 1776,
which could have ended the war in a Continental, or American, loss by forfeit).

Three of the Continental Army units which took part in the assault on the Breymann Redoubt,
were the 2nd Massachussetts, The 2nd New York, and The 1st Canadian Regiment.

The uniform of the battalion companies until 1779,
was brown faced with white.
After that date the facings were changed to red.
In August 1777,
the regiment was assigned to Benedict Arnold
on his expedition in relief of the Siege of Fort Stanwix.
It then saw service in both Battles of Saratoga as part of Ebenezer_Learned's brigade.