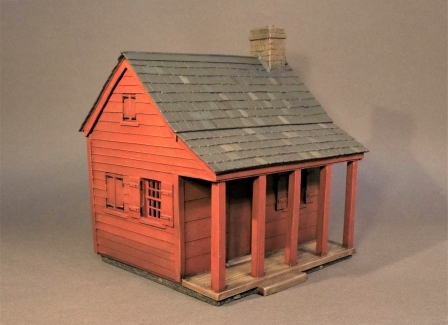 The model can be suitable for the French Indian War, American Revolution, and of course the American Civil War.

THE BATTLE OF SARATOGA 1777,
ASSAULT ON THE BREYMANN REDOUBT, 7th October 1777

The German mercenaries were firing steadily from their redoubt.
From the rear came the crack of rifles.
A general mounted and, his sword flashing, led the riflemen into the redoubt.
German resistance collapsed. The Battle of Saratoga was over.
The day was Oct. 7th, 1777.
Twelve days later, "Gentleman Johnny" Burgoyne,
the gifted, courageous British commander, surrendered to the American general, Horatio Gates.
Thus ended the most ambitious and dangerous offensive launched by Britain in the Revolution.
The attack on the redoubt was the last of a series of actions that constituted the Battle of Saratoga,
considered the turning point of the Revolution.

The rifle fire that decimated the Germans awoke echoes around the World.
The French court, friendly to any who fought their ancient British enemy,
finally was convinced that France's interest lay in entering the war on the side of the Americans.
Following intense fighting with the Continental Army in September,
the British Army fortified themselves behind two defensive redoubts- the larger,
better defended Balcarres Redoubt, and the weaker Breymann Redoubt.
American forces, led by General Benedict Arnold,
managed to take the Breymann Redoubt, which gave them a strong position behind the British lines.
The loss of the Redoubt rendered the British position untenable.
The British Army was forced to pull back to the river,
from which position they would attempt to retreat north the next morning.

A young and ambitious John Neilson came to this area in 1772 from just outside Elizabeth, NJ.
He went to work in the village of Stillwater,
two miles south of the house, on the farm of Abner Quitterfield.
Only three years later, in 1775,
he leased 150 acres of land, and 'married the boss's daughter,' Lydia.
Within a year or two, they built this small house on the lot he had leased.

In 1777, a British army was invading southward from Canada into New York.
Their route would take them through the Neilsons' back yard.
John took Lydia and their possessions to the safety of her parents' home in Stillwater.
He then exchanged his home for a tent,
serving with his local militia regiment-some of whom would be encamped nearby.

The only account from the time of the battles says
General Enoch Poor of New Hampshire and General Benedict Arnold of Connecticut were quartered here.

Fighting came within about one mile of this house.
As Gates' army moved on, though, they left behind a farm in near-ruins.
John and Lydia returned shortly after the army's departure and began restoring the farm.
Their crops had been ravaged, and their fields torn up.
John filed a damage claim in May 1778, in the amount of £100 (about three times a soldier's annual salary), but he was not reimbursed.

The Neilsons continued with their family life, eventually having eight children.
As the family grew, a small house would no longer do;
the first U.S. Census from 1790 lists eleven people living here. By 1830, they had built a larger, two-story home.
By the 1890s, they had pushed back the original part of the house and added a carriage barn.
This house is based on the reproduction of Neilson,s Farmhouse,
now standing in the grounds of the SARATOGA BATTLEFIELD NATIONAL PARK.


The model has a lift off roof, with basic interior detail, and a front door which can be opened or closed.