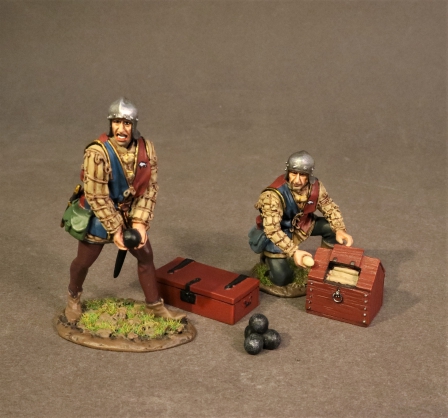 The final victory went to a claimant of the Lancastrian party,
Henry Tudor, who defeated the last Yorkist king,
Richard III, at the Battle of Bosworth Field.
After assuming the throne as Henry VII,
Henry Tudor married Elizabeth of York,
the eldest daughter and heiress of Edward IV,
thereby uniting the two claims.
The House of Tudor ruled England and Wales until 1603.

Because one pound of powder was required to throw nine pounds of shot,
and because the barrel had to be washed
with a mixture of water and vinegar after every firing,
ten shots per hour was considered a good rate of fire.
During the Wars of the Roses,
this slow rate meant that cannon were used mainly on the eve
or at the start of a battle,
firing one volley at the enemy before the hand-to-hand combat commenced.

Experts in medieval gunnery suspect that the artillery
played a role at the beginning of the battle
but may have become less useful tactically as the battle progressed.
It was notoriously difficult to
turn the artillery pieces round to face new directions
so adapting to the progress of the battle would have been difficult
for these early gunners.
Their artillery pieces and carriages
would probably have weighed between 400 and 1000 kilos each.

Cannon appears to have been used extensively
by both sides at the Battle of Bosworth Field.
The present position of the battlefield is based on
the discovery in a field by Fenn Lane Farm
of a large quantity of battle relics including many cannon balls.

One account mentions 140 cannon,
while the archaeological searches of the battlefield
have found more than 30 cannonshot
more than any other discovered on a European medieval battlefield.

Since about 1415, the English Crown
had appointed a master of ordnance to supervise the king's artillery.
In 1456, John Judde, a LONDON merchant,
won appointment to the post by offering to supply HENRY VI
with guns and powder at his own expense.
Judde's ambitious program of collecting
and manufacturing guns for the Lancastrians
so alarmed the Yorkists that they ambushed
and killed him in June 1460 as he was supervising delivery
of a new shipment of weapons.
Edward IV also appreciated the importance of artillery,
and his Masters of Ordnance (like John Wode,
who held office from 1463 to 1477)
were trusted members of the royal household.
Edward was said to frequently inspect his ordnance,
and his campaigns usually included a sizable artillery train.