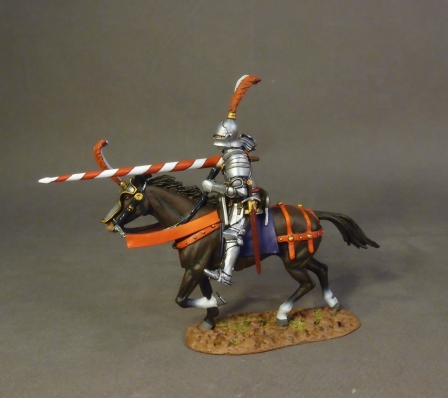 In an effort to destroy Henry Tudor,
Richard decided to leave his position on Ambion Hill,
leading his household retainers down the slope,
thundering towards Henry' s men with levelled lances.

A few of the key personalities involved in King Richard's heroic last charge will be available in the summer.

King Richard III and his standard bearer, Sir Percival Thirlwall,
charge towards Henry Tudor and his standard bearer William Brandon.
King Richard III (2 October 1452-22 August 1485)
was King of England from 1483 until his death in 1485,
at the age of 32, in the Battle of Bosworth Field.
He was the last king of the House of York
and the last of the Plantagenet dynasty.
His defeat at Bosworth Field,
the last decisive battle of the Wars of the Roses,
marked the end of the Middle Ages in England.