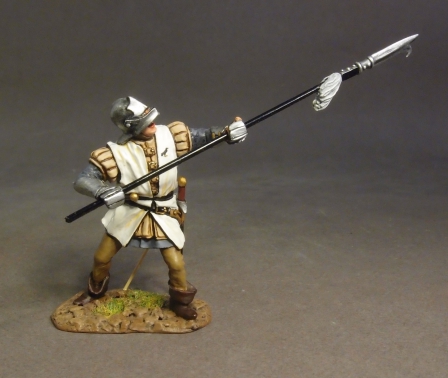 
Rhys ap Thomas (1449–1525),is a Welsh name meaning,
Rhys son of Thomas, and was a Welsh soldier and landholder
who rose to prominence during the Wars of the Roses,
and was instrumental in the victory of Henry Tudor at the Battle of Bosworth.
He remained a faithful supporter of Henry
and was rewarded with lands and offices in South Wales.
Some sources claim that he personally delivered the death blow to King Richard III at Bosworth with his poleaxe.


Rhys ap Thomas had declined to support Buckingham's earlier uprising.
In the aftermath, when Richard appointed officers to replace those who had joined the revolt,
he made Rhys ap Thomas his principal lieutenant in south west Wales
and granted him an annuity for life of 40 marks.
Rhys was required to send his son Gruffydd ap Rhys ap Thomas
to the King's court at Nottingham as a hostage,
but he excused himself from this obligation
by claiming that nothing could bind him to his duty more strongly than his conscience.
He is supposed to have taken an oath that.

“Whoever ill-affected to the state,
shall dare to land in those parts of Wales where I have any employment under your majesty,
must resolve with himself to make his entrance and irruption over my belly.”

On 1 August 1485, Henry set sail from Harfleur in France.
With fair winds, he landed at Mill Bay near Dale on the north side of Milford Haven,
close to his birthplace in Pembroke Castle,
with a force of English exiles and French mercenaries.
At this point, Rhys should have engaged him.
However, Rhys instead joined Henry.
Folklore has it that the Bishop of St.
David's offered to absolve him from his previous oath to Richard.
The Bishop also suggested that Rhys fulfil the strict letter of his vow
by lying down and letting Henry step over him.
This undignified procedure might have weakened Rhys's authority over his men,
so instead, Rhys is said to have stood under the Mullock Bridge about 2 miles (3.2 km)
north of Dale while Henry marched over it.