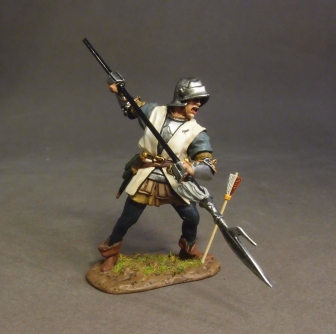 Henry's and Rhys's forces marched separately through Wales,
with Rhys recruiting 500 men as he proceeded.
They rejoined at Welshpool before crossing into England.
Rhys's Welsh force was described as being large enough to have "annihilated" the rest of Henry's army.
On 22 August, they met Richard's army near Market Bosworth.
In the resulting Battle of Bosworth,
Richard launched an attack led by John Howard, 1st Duke of Norfolk.
According to a contemporary ballad,
Rhys's men halted the assault.
"Norfolk's line began to break under pressure from Rhys ap Thomas's men"
and the Duke was killed by an arrow shot.
Hoping to turn the tide and win the battle rapidly by killing his rival,
Richard and his companion knights charged directly at Henry.
The king was unhorsed and surrounded.
The poet Guto'r Glyn implies that Rhys himself was responsible for killing Richard, possibly with a poll axe.
Referring to Richard's emblem of a boar, the poet wri
tes that Rhys "killed the boar,
shaved his head"("Lladd y baedd, eilliodd ei ben").
However, this may only mean that one of Rhys's Welsh halberdiers killed the king,
since the Burgundian chronicler Jean Molinet,
says that a Welshman, one of Rhys' men suspected to be Wyllyam Gardynyr,
struck the death-blow with a halberd.
Guto'r Glyn himself says that Rhys was "like the stars of a shield with the spear in their midst on a great steed"
("A Syr Rys mal sýr aesaw, À'r gwayw'n eu mysg ar gnyw mawr").
He was knighted on the field of battle.