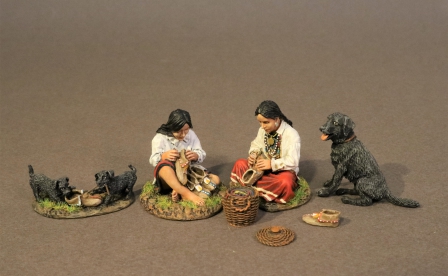 In Eastern Woodlands society,
there were clear-cut family roles for both the men and women.
Men were responsible for all the hunting and fishing, and sometimes traveled great distances to catch food.
Women generally stayed near the home to look after the children.
They tended to any crops, and collected food, nuts, berries and edible plants.
Women prepared the animal skins and made and repaired all the clothing.

A moccasin is a shoe, made of deerskin or other soft leather,
consisting of a sole (made with leather that has not been "worked")
and sides made of one piece of leather, stitched together at the top, and sometimes with a vamp (additional panel of leather).
The sole is soft and flexible and the upper part often is adorned with embroidery or beading.
Historically, it is the footwear of many indigenous people of North America;
moreover, hunters, traders, and European settlers wore them.
The moccasin derives from the Algonquian language Powhatan word makasin.
Moccasins protect the foot while allowing the wearer to feel the ground.
The Plains Indians wore hard-sole moccasins,
given that their territorial geography featured rock and cacti.
The eastern Indian tribes wore soft-sole moccasins, for walking in leaf-covered forest ground.