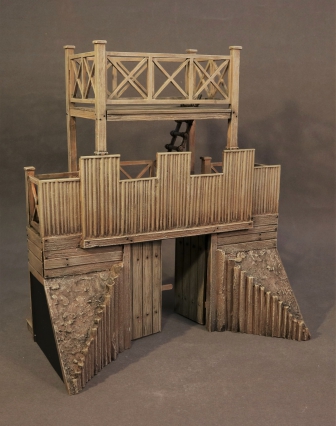 
Roman forts, also known as castra,
could be found all over the Roman Empire.
The huge empire stretched from northern England
to North Africa and from Portugal to the Middle East.

A Roman fort could be built in timber and turf,
or in stone, or even a combination of both.

Turf and Timber was quick, easy to obtain, and extremely effective.
From the first century AD or earlier,
Turf and Timber forts were common,
but after that date forts were normally built in stone,
because with settled frontiers units were far less likely to move on from permanent bases.
Some Roman forts could hold up to 6,000 people.
As well as barracks for soldiers, they had stables,
a butcher shop and bakery and administrative offices.

In the village of Baginton, near Coventry,
a Roman fort has been reconstructed by archaeologists.
Made from timber and turf,
the Lunt Roman Fort is an example of the type of buildings the Roman Army constructed
in Britain in the years during and after the uprising by Boudicca.

The Turf and Timber Roman fort can also be used for the Battle of Alesia displays.
The Battle of Alesia took place in September,
52 BC around the Gallic oppidum of Alesia,
a major town centre and hill fort of the Mandubii tribe.
It was fought by an army of the Roman Republic commanded by Julius Caesar
against Gallic tribes united under the leadership of Vercingetorix of the Arverni.
It was the last major engagement between Gauls and Romans
and the end of organized resistance to the Roman Empire,
marking the turning point of the Gallic Wars in favour of Rome To guarantee a perfect blockade,
Caesar ordered the construction of an encircling set of fortifications,
called a circumvallation, around Alesia.
The details are known from Caesar's Commentaries.
About 18 kilometres of 4 metre high fortifications were constructed in about three weeks .
This line was followed inwards by two four-and-a-half metre wide ditches,
also four-and-a-half metres deep.
The farthest from the fortification was filled with water from the surrounding rivers.
These fortifications were supplemented with mantraps and deep holes in front of the ditches,
and regularly spaced watch towers equipped with Roman artillery.
Vercingetorix's cavalry often raided the construction works attempting
to prevent full enclosure.
Caesar ordered the construction of a second line of fortifications,
the contravallation, facing outward and encircling his army
between it and the first set of walls.
The second line was identical to the first in design and extended for 21 kilometres.