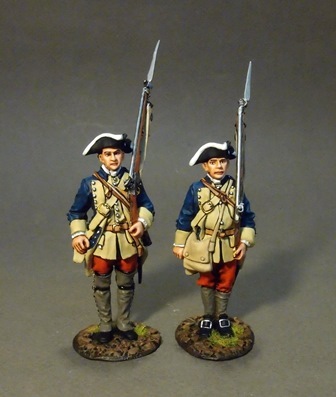 
On July 6, 1757,
the South Carolina Provincial Regiment was created by an act of the Assembly.
The regiment was to be made up of 7 companies of 100 men each.
The regiment was commanded by Lieutenant-colonel Probart Howarth.
Howarth, a veteran of Braddock's campaign,
also held a commission as lieutenant in the Independent Companies.

"They have passed a Vote here for granting a Sum for raising
700 Men subject to the Orders & Disposal of Lord Loudoun,
have put them on the same Establishment with our Troops,
and have given your old Acquaintance Howarth the Command of Them,
as Lieut. Colo. & Commandant of the So. Carolina Provincials."
(George Washington Papers (memory.loc.gov/),
Captain George Mercer to George Washington,
August 17, 1757.)

Each company was led by 1 captain ,
2 lieutenants and 1 ensign.
Each company also had 4 sergeants,
4 corporals and 2 drummers.

The regiment was also known as the Buffs,
due to the facing colour of their uniforms.
Men were only recruited with great difficulty,
and by mid 1758 the regiment contained only about 550 privates.
Attempts were made to fill up the regiment by enlisting vagrants.