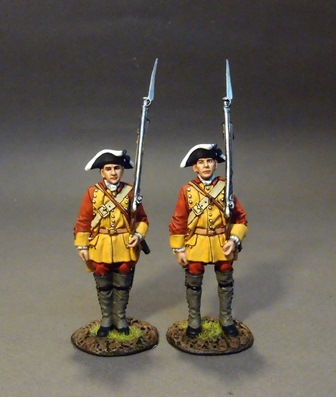 
In August 1755,
the first and second regiments of Connecticut Provincials
(a total of about 850 men) took part in the expedition against Fort Saint-Frédéric
(present-day Crown Point) led by William Johnson of New York.
A fort initially known as Fort Lyman
(soon renamed Fort Edward) was built on the Hudson River
at the carrying place leading to Lake Saint-Sacrement (present-day Lake George).

At the beginning of September,
Johnson's force resumed its advance and reached Lake Saint-Sacrement.
On September 8,
part of his force was ambushed by a French force under Dieskau.
The Colonials were badly mauled and retired to Johnson's camp.
The French followed up but their attack on Johnson's camp was repulsed,
Dieskau being wounded and captured.
Johnson did not organize any counteroffensive but built
Fort William Henry on the shore of Lake Saint-Sacrement.

In September,
Connecticut raised and sent about 1,400 militia
to reinforce Johnson at Fort William Henry.
On November 27,
when Johnson retreated to the Hudson,
he left contingents from each province
to garrison Fort William Henry during the winter.

For the campaign of 1757, Connecticut raised 1,400 men.
In mid-August,
after the fall of Fort William Henry,
Connecticut assemble 5,000 militia who were sent
to reinforce General Webb on the frontier.

On March 8 1758,
a special assembly at New Haven resolved to raise
5,000 Connecticut Provincials for the incoming campaign.
These were formed into 4 regiments,
each consisting of 12 companies.

In July 1758,
the 4 Provincial regiments from Connecticut took part
in the expedition against Carillon (present-day Ticonderoga).
On July 5, they embarked at the head of Lake George.
On July 6 at daybreak,
the British flotilla reached the narrow channel leading
into Lake Champlain near Fort Carillon and disembarkation began at 9:00 a.m..
On July 8, they fought in the disastrous Battle of Carillon.
At daybreak on July 9,
the British army re-embarked and retreated to the head of the lake
where it reoccupied the camp it had left a few days before.

On March 8 1759,
a special assembly at Hartford resolved to raise
3,600 Connecticut Provincials for the campaign.
They were formed into 4 regiments, each of 10 companies.
On May 10,
on General Amherst's insistance,
an additional 1,000 men were raised and integrated into the 4 existing regiments.
The Connecticut Provincials,
joined Amherst's Army for a renewed attempt against Carillon.