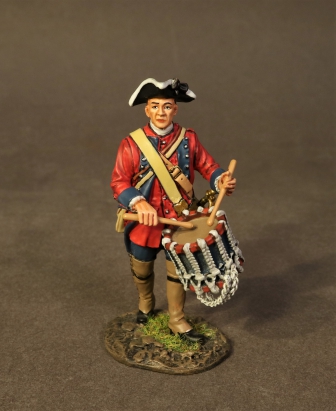 The series will also attempt to cover probably the most significant battle of the American Revolution.


The two Battles of Saratoga were a turning point in the American Revolution.
On September 19th, British General John Burgoyne achieved a small,
but costly victory over American forces led by Horatio Gates and Benedict Arnold.
Though his troop strength had been weakened,
Burgoyne again attacked the Americans at Bemis Heights on October 7th,
but this time was defeated and forced to retreat. He surrendered ten days later,
and the American victory convinced
the French government to formally recognize the colonist's cause and enter the war as their ally.

The 60th (Royal American) Regiment of Foot,
better known under its later name,
The King's Royal Rifle Corps,
has long been associated with Canada.
After Braddock's defeat by the French and Indians in 1755,
authority was granted to raise a regiment of four battalions to be recruited
in Germany and from German colonists in North America.
The regiment was named the 62nd,
or Royal American, Regiment of Foot;
but it was re-designated the 60th (Royal American) Regiment of Foot in February 1757.
Recruiting for the Royal Americans in North America was disappointing,
and more than half its strength was drafted from men rejected by British regiments in Ireland.
From this unlikely collection of foreigners and cast-offs
was fashioned one of the most renowned corps of the British Army.