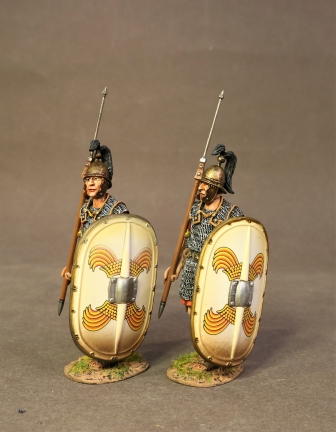 
Continuous expansion, wars, conflicts,
and the acquisition of a growing,
overseas territory led to an increasing degree of professionalism within the army.
The late-Republic saw much of its action taking place
within the Roman borders and between Roman commanders
as they vied for control of the republic.
There was a significant intertwining of military and politics
in the acquisition and maintenance of power.
After the Social War, and following the establishment of
the First Triumvirate by Julius Caesar,
Licinius Crassus, and Pompeius Magnus,
there grew an emphasis on the expansion of a united republic
toward regions such as Britain and Parthia.
The effort to quell the invasions and revolts of non-Romans persisted throughout the period,
from Marius battles with the wandering Germans in Italy to Caesar's campaign in Gaul.