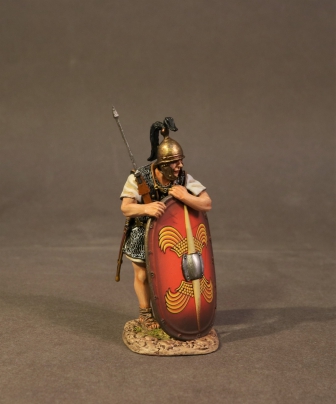 
The Scutum was a type of shield used among Italic peoples in antiquity,
and then by the army of ancient Rome starting about the fourth century BC.
The Romans adopted it when they switched
from the military formation of the hoplite phalanx of the Greeks to the formation with maniples.
In the former, the soldiers carried a round shield, which the Romans called clipeus.
In the latter, they used the scutum,
which was a larger shield.
Originally it was an oblong and convex shield.
By the first century BC it had developed into the rectangular,
semi-cylindrical shield that is popularly associated with the scutum in modern times.
This was not the only shield the Romans used;
Roman shields were of varying types depending on the role of the soldier who carried it.
Oval, circular and rectangular shields were used throughout Roman history.