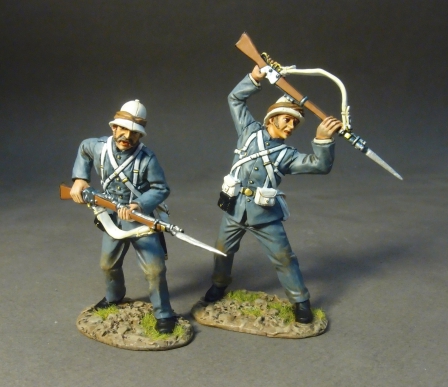 From 1855 what are now known as The Royal Marines,
were labeled The Royal Marine Light Infantry.
They were to mainly be used in a skirmishing capacity in front of infantry.
They were issued gray wool coats and trousers.
The foreign service helmets were not stained,
but kept white in keeping with the pristine Marine turnout.
The marines were in Gen. Graham's square at El Teb.
At Tamai in 1884 they formed the rear wall of Maj.
Davis’s 2nd Brigade square.
When the wild Hadenodoa warriors flooded into the square through the gap left by the Black Watch.
The rear rank of the marines were compelled to turnabout and fight in both directions.
At this time the Marines acted as a breakwater to steady elements of the York and Lancaster Regiment,
and the Black Watch as they recovered to retrieve the situation.
The Marines were to take part in most of the major actions throughout the Sudan Campaigns.