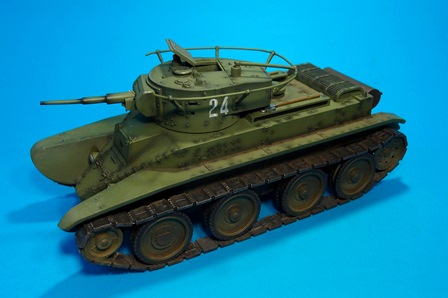 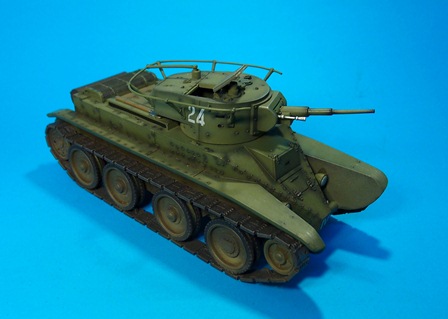 The BT tanks were a series of Soviet cavalry tanks
produced in large numbers between 1932 and 1941.
They were lightly armoured, but reasonably well-armed for their time,
and had the best mobility of all contemporary tanks of the world.
The BT tanks were known by the nickname Betka.

They first saw action in the Spanish Civil War.
A battalion of BT-5s fought on the Republican side,
and their 45 mm guns could easily knock out
the opposing German and Italian light tanks.

The BT tanks were "convertible tanks".
This was a feature designed by J. Walter Christie to reduce
wear of the unreliable tank tracks of the 1930s.
In about thirty minutes the crew could remove the tracks
and engage a chain drive to the rearmost road wheel on each side,
allowing the tank to travel at very high speeds on roads.
In wheeled mode the tank was steered by pivoting the front road wheels.
However, Soviet tank forces soon found the convertible option
of little practical use in a country with few paved roads,
and it consumed space and added needless complexity and weight.
The feature was dropped from later Soviet designs.

The direct successor of the BT tanks
would be the famous T-34 medium tank, introduced in 1940.