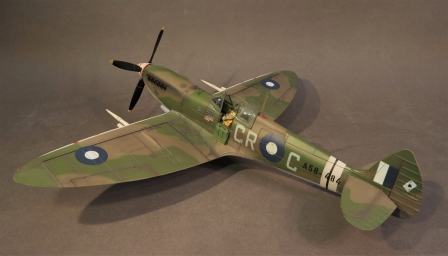 
No. 457 Squadron was a Royal Australian Air Force‚ (RAAF)
fighter squadron of World War II.
Equipped with Supermarine Spitfire fighters,
it was formed in England during June 1941
under Article XV of the Empire Air Training Scheme.
The squadron was transferred to Australia in June 1942
and saw combat in the South West Pacific Area
before being disbanded in November 1945.

The squadron saw combat against both Nazi Germany
and the Empire of Japan during the war.
From March to May 1942 it was based in southern England
and flew missions over German-occupied France
during which it shot down at least five Luftwaffe aircraft.
After being deployed to Australia,
No. 457 Squadron was based near Darwin as part of No.
1 Wing RAAF and intercepted several Japanese raids on Allied bases
in northern Australia between March and November 1943.
The squadron remained at Darwin and saw almost no combat during 1944,
but moved toÃ‚ Morotai and later LabuanÃ‚ in 1945
from where it attacked Japanese positions
in the Netherlands East Indies
and Borneo as part of Allied offensives in these areas.

RAAF-03 includes a seated pilot figure in the cockpit,
the side door does open.
The pilot figure can be removed.
The pilots canopy can be opened.
The Propeller plugs into position, and can turn.
The front and rear undercarriages are removable and can be switched

Group Captain Clive Robertson Caldwell,
DSO, DFC & Bar (28 July 1911-5 August 1994)
was the leading Australian‚ air ace‚ of World War II.
He is officially credited with shooting down 28.5
enemy aircraft in over 300 operational sorties,
including an‚ ace in a day.
In addition to his official score,
he has been ascribed six probables and 15 damaged

Supermarine Spitfire MK VIII,
A58-484 (British serial JG543) at Morotai in March 1945;
was one of three Spitfire MkVIII's allocated to Clive R Caldwell.
This aircraft like many others,
was delivered to the RAAF wearing the RAF 'desert' scheme of Dark Earth,
Middle Stone and Azure Blue.
The Middle Stone portions were subsequently over painted in Foliage Green.

The Pilot initials 'CR-C' were Sky Blue,
spinner and fuselage band in white with probably black bands.
Below the cockpit was a Group Captain rank pennant and an impressive scoreboard
indicating aerial victories against German,
Italian and Japanese aircraft.
Of note is the relative contrast between upper surface camouflage colours.
RAF 'desert' camouflaged Spitfires typically had a 'darker' shade of the standard
RAF colour Dark Earth resulting in a relatively lower
contrast upper scheme when combined with RAAF Foliage Green.

No. 457 Squadron flew its first operations from Morotai on 10 February.
The squadron's main roles in this period
were to conduct ground attack missions against Japanese camps and shipping
as well as escorting other aircraft engaged in attacking these targets.
This involved a heavy workload,
and the squadron flew over 293 operational sorties
between February and the end of April.
From May No.‚ 457 Squadron's Spitfires began using‚ dive bombing‚ tactics
as well as strafing targets with their guns.

No. 457 Squadron participated in the‚ Borneo Campaign
during the final months of the war.
On 27 May it was ordered to prepare for deployment,
and on 5 June its personnel and equipment sailed for Labuan island
off the north-west coast of Borneo