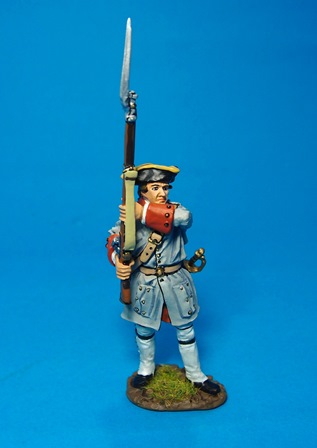 
The Régiment de Béarn was a French Army regiment active in the 18th century,
and was recruited from the Picardy region of France.
It is principally known for its role in the Seven Years' War,
when it served with distinction in the North American theatre.
French Regiments at this time consisted of two battalions.
The two battalions of this regiment operated on different theatres of operation
for most of the Seven Years' War.
The 1st Battalion remained in Europe,
and was assigned to the defence of the coasts.
At August 1, 1757, the 1st Battalion was stationed at La Rochelle in the Aunis country.
The 2nd battalion was sent to New France, and arrived in June 1755.
The Regiment was to take part at the siege of Fort William Henry 1757,
and in 1758, the regiment participated in the defense of Fort Carillon.

On September 13, 1759, they were present during the siege of Quebec City,
and at the Battle of The Plains of Abraham, it was deployed in the centre.
This Regiment probably underwent the most changes in its uniform,
than any other regiment in New France.
Waistcoats, collars and cuffs were originally blue, but were changed to red in 1757.
In 1760, the 2nd battalion returned to France.