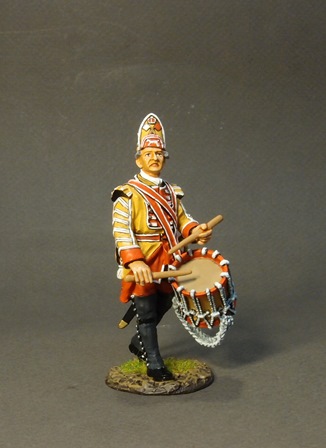 
During the reign of Queen Anne of Great Britain the English Army
had become very disorganized and undisciplined.
The Hanoverians (George I) who succeeded Queen Anne in 1714 reorganized the English Army,
requiring the troops to march in step to proper military music.
Thus fife & drum music was adopted by the British military (except for the Scottish regiments).

The musicians provided music for the army on the march.
As Napoleon would prove, music would be very effective in motivating an army to march long distances.
The musicians were also used to broadcast various signals.
Military camp life required a succession of daily signals:
time to get up, breakfast call, sick call, assembly,
lunch, duty calls, dinner, evening retreat, lights-out (curfew).

The "Tattoo" comes from the Dutch die den tap toe which was a signal
for the beer sellers to "turn off the taps" so that the soldiers could finish their beers and report back to camp.
This signal consisted of the fifes and drums marching up and down the streets of the garrison town or camp,
playing as they marched - at the end,
they would stop marching, and conclude with a hymn.

While the army was encamped (or billeted in a city) the "officer of the day"
(supervising at that moment) would always have a drummer with him to give impromptu and emergency signals:
to sound "alarm" at an imminent attack or to call for a conference of the officers.

Contrary to common opinion,
signals generally were NOT given during battles,
excepting "cease fire" and related signals.
The battlefield was too noisy and confusing,
and, as the French discovered when they experimented with the idea in the 1750's,
the enemy can hear your signals.