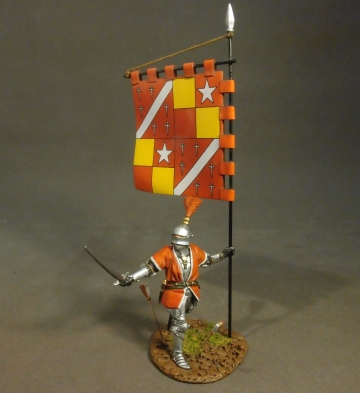 So great and extensive was the use of these badges,
that they were far more generally employed than the coat of arms.
For where a man's badge would be common knowledge and bear some repute throughout the kingdom,
few people would know what his coat of arms looked like.

There were 3 main types of flags used during the Wars of The Roses.
The largest was known as the Heraldic Banner,
and was used solely for displaying the coats of arms.
This was normally square and made with stiffened buckram with a batton along the top.
Therefore it was always on the fly,
so the standard bearer did not have to wave the banner about,
which gave him a spare hand in which he could brandish a weapon,
so he would be able to defend himself and the banner.

The third type was known as a standard,
and was a long swallow tailed style.

A few of the key personalities involved in King Richard's heroic
last charge will be available in the summer.

King Richard III (2 October 1452 - 22 August 1485)
was King of England from 1483 until his death in 1485,
at the age of 32, in the Battle of Bosworth Field.
He was the last king of the House of York and the last of the Plantagenet dynasty.
His defeat at Bosworth Field,
the last decisive battle of the Wars of the Roses,
marked the end of the Middle Ages in England.