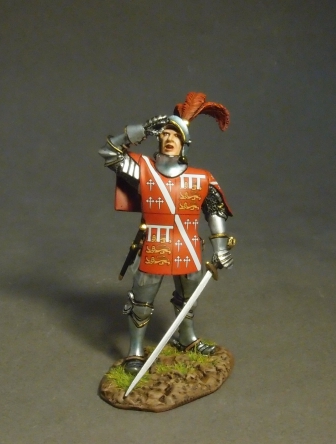 THE RETINUE OF JOHN HOWARD, 1st DUKE OF NORFOLK

Richard's most loyal subject was John Howard,
1st Duke of Norfolk.
The duke had served Richard's brother for many years and
was one of Edward IV's closer confidantes,
he was a military veteran,
having fought in the Battle of Towton in 1461 and served as
Hastings' deputy at Calais in 1471.

John Howard was slain at the Battle of Bosworth Field
on 22 August 1485 along with his friend and patron King Richard.
Howard was the commander of the vanguard,
and his son, the Earl of Surrey, his lieutenant.
Howard was killed when a Lancastrian arrow struck him in the face after the face guard
had been torn off his helmet during an earlier altercation with the Earl of Oxford.