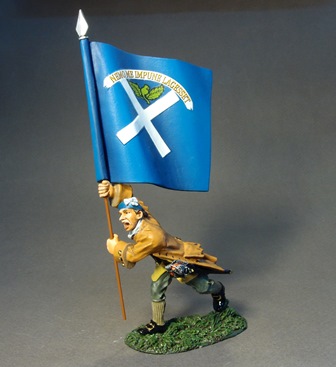 
The 2nd Battalion of Lord Ogilvy's Forfarshire Regiment was present at the Battle of Culloden.
When the battle ended,
the defeated regiment retreated south to Glen Clova, where it was disbanded.
All the Jacobite flags captured by
the Hanoverian troops at Culloden were taken to Edinburgh and burnt.
Legend had it that Captain John Kinloch,
who carried the flag at Culloden,
hid the banner at Logie House, near Kirriemuir.
The flag survived and is now on display at the McManus Gallery in Dundee.

The Latin words on the flag translate into the old Scottish motto:
'No one provokes me with impunity'.
The emblem on the flag is the Scottish thistle,
rather than a symbol or a coat of arms associated with the deposed Stewart dynasty.
However, it is believed that the Scottish thistle was the crest used by Lord Ogilvy's Jacobite regiment.