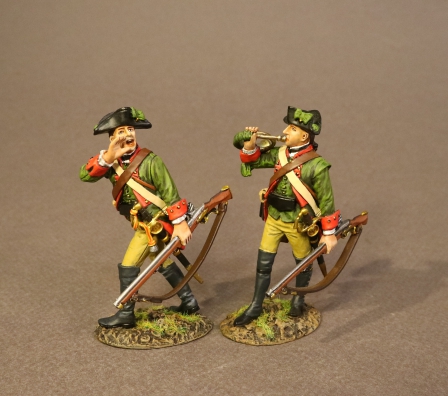 When the American Revolution began,
the British Army was too small to overwhelm the rebellious colonies with armed might.
Subsequently, United Kingdom entered treaties with a number of German principalities,
which provided the British Crown with allied contingents for service
in North America in return for monetary subsidies.
A mutual aid- and alliance treaty
between United Kingdom and Hesse-Hanau was entered in February 1776.
A Jager corps under the command of Lieutenant Colonel Karl Adolf Christoph von Creutzburg
was among the units in the Hesse-Hanau contingent

The Jagers were recruited from state foresters
and other professional hunters.
They were selected for their marksmanship, and were all volunteers,
in contrast with the drafted or pressed soldiers
that filled the ranks of the Hesse-Hanau infantry.
The pay was higher than for ordinary troops.
The British government especially requested Jagers for the American campaign,
as they were perceived as better able to endure the North American wilderness.