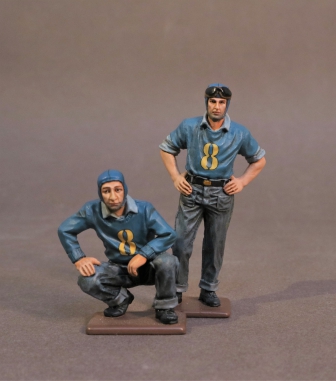 USS Saratoga (CV-3) was a Lexington-class aircraft
carrier built for the United States Navy during the 1920s.
Originally designed as a battlecruiser,
she was converted into one of the Navy's first aircraft
carriers during construction to comply with the Washington Naval Treaty of 1922.
The ship entered service in 1928
and was assigned to the Pacific Fleet for her entire career.
Saratoga and her sister ship, Lexington,
were used to develop and refine carrier tactics
in a series of annual exercises before World War II.
On more than one occasion these included
successful surprise attacks on Pearl Harbor, Hawaii.
She was one of three prewar US fleet aircraft carriers,
along withÂ Enterprise and Ranger,
to serve throughout World War II.

Air operations aboard carriers included a wide variety of jobs.
In addition to the plane crews,
a large number of support personnel were required to keep the planes flying.
These included mechanics, ordnancemen,
plane handlers, firefighters, catapult crews and medical teams.
Without them and their dedication to getting the job done,
the carriers and their air groups would not have succeeded.
Men whose duties required them to work on the carrier's flight deck
wore brightly coloured shirts for two reasons.
The flight deck was a potentially dangerous place,
especially when planes were being launched or recovered.
Anyone not wearing a colour coded shirt didn't belong on the flight deck
during operations The colour coded shirts also indicated the specific job speciality of the men who wore them.

A U.S. Navy Aircraftcarrier's deck crew exists to do one thing:
to consistently put aircraft into the air and safely recover them after they launch.
In order to make this happen, there exists a small army of flight deck facilitators,
and each individual has their own role primarily designated by the color of the shirt they wear. Life on the flight deck is dangerous and taxing.
Spinning propellers, grease everywhere,
and a stiff sea wind that never stops are just a few of the things that must be endured for many hours at a time.
The night and bad weather throw a whole other set of problems into the mix.

Yellow shirts are worn by aircraft handlers and aircraft directors
that shuttle aircraft around the carrier's tight and chaotic deck.

Plane Handlers,
who work under the direction of the yellow shirt wearing aircraft handlers,
assist in moving aircraft around the deck.
They also can operate the carrier's massive aircraft elevators,
drive tractors and work as messengers and verbal liaisons.