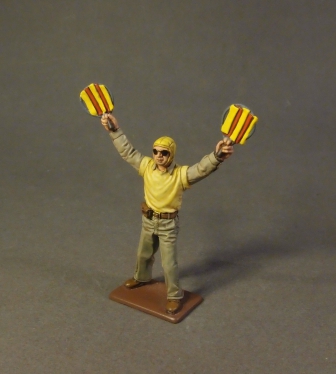 In the two decades between the end of World War 1 and the start of World War 2,
military aviation underwent a complete transformation.
The typical combat aircraft of 1918 was a fabric-covered externally braced biplane
with fixed landing gear and open cockpits. Few aero engines developed as much as 250 horsepower,
and top speeds of 200 km (120 miles) per hour were exceptional.
By 1939 the first-line combat aircraft of the major powers
were all-metal monoplanes with retractable landing gear.

Most early aircraft carriers were conversions of ships
that were laid down (or had even served) as different ship types:
cargo ships, cruisers, battlecruisers, or battleships.
During the 1920s,
several navies started ordering and building aircraft carriers
that were specifically designed as such.
This allowed the design to be specialized to their future role,
and resulted in superior ships.
During the Second World War,
these ships would become the backbone of the carrier forces of the US,
British, and Japanese navies, known as fleet carriers.

USS Saratoga (CV-3) was a Lexington-class aircraft carrier
built for the United States Navy during the 1920s.
Originally designed as a battlecruiser,
she was converted into one of the Navy's first aircraft carriers
during construction to comply with the Washington Naval Treaty of 1922.
The ship entered service in 1928
and was assigned to the Pacific Fleet for her entire career.
Saratoga and her sister ship, Lexington,
were used to develop and refine carrier tactics
in a series of annual exercises before World War II.
On more than one occasion these
included successful surprise attacks on Pearl Harbor, Hawaii.
She was one of three prewar US fleet aircraft carriers,
along with Enterprise and Ranger,
to serve throughout World War II.

A U.S. Navy Aircraftcarrier,s deck crew exists to do one thing:
to consistently put aircraft into the air and safely recover them after they launch.
In order to make this happen,
there exists a small army of flight deck facilitators,
and each individual has their own role primarily
designated by the color of the shirt they wear.

A Landing Signal Officer (LSO) is a naval aviator with additional specialized training
to better facilitate recovery operations on the ship.
LSOs provide guidance for aircraft making approaches to the carrier.
They monitor the approach and remain in contact with the pilot
during the approach by hand signals.

Carrier approaches or 'passes at the boat',
while analogous in technique to an approach to land at a terrestrial airport,
require much more precision and have far less margin for error
due to the landing area's small size (75 x 600ft).
And the requirement that the plane must impact the deck on speed
and on angle of attack within a small area to snag an arrester wire
and trap successfully makes this even more difficult.

The Navy has adopted this policy of the landing signal officer
as well trained LSOs can quickly dissect problems with the approach
and alert the pilot to correct prior to the pilot even becoming aware
that there is a problem developing.

In the U.S. Navy, aircraft carrier operations began with USS Langley (CV-1) in 1922.
Langleys initial flight operations
were on an experimental basis to learn what worked and what didn't.
The first pilots had no signaling system for assistance from shipboard personnel.
Langleys first executive officer, Kenneth Whiting,
had a hand-cranked movie camera film every landing to aid in evaluation of landing technique.
When not flying, Commander Whiting observed all landings
from the aft port corner of the flight deck.
Commander Whiting's position remained visible to landing pilots
in critical touchdown attitudes when the nose of the aircraft might
obscure the pilot's view straight ahead.
Pilots found Commander Whiting's body language helpful
and suggested an experienced pilot be assigned to occupy that position,
using agreed signals which evolved with experience.
These Landing Signal Officers or Landing Safety Officers (LSOs)
faced the incoming plane and held coloured flags for improved visibility.
Because LSOs used coloured paddles, flags,
or wands well into the jet age, the officers
became unofficially known as "paddles" (US), or "batsmen" (UK).
They are still referred thus to this day,
and the LSO trade is referred to as "waving".