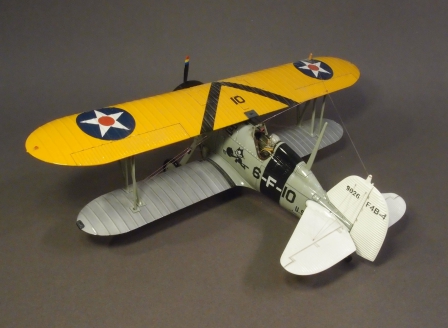 In the two decades between the end of World War 1 and the start of World War 2,
military aviation underwent a complete transformation.
The typical combat aircraft of 1918 was a fabric-covered
externally braced biplane with fixed landing gear and open cockpits.
Few aero engines developed as much as 250 horsepower,
and top speeds of 200 km (120 miles) per hour were exceptional.
By 1939 the first-line combat aircraft of the major powers were all-metal monoplanes with retractable landing gear.

The Boeing P-12/F4B was an American pursuit aircraft
that was operated by the United States Army Air Corps and United States Navy.

Though best known in later years for producing large bomber or transport aircraft,
Boeing produced a series of excellent fighters from 1923 to 1933.
The most famous of those biplane fighters,
the F4B, was the refinement of design experience gained from its FB,
F2B and F3B predecessors.

Nimble, rugged and reliable, the F4B-4's debut coincided nicely
with advances in carrier operations
aboard the new carriers Lexington (CV-2) and Saratoga (CV-3).
The aircraft remained the Navy and Marine Corps' first-line fighter
until replaced by faster and more powerful Grumman biplanes.

VF-6B, known as the"Fighting Six" had as their mascot,
"Felix The Cat", a well known cartoon character of the time.
The lit bomb he carries relates to when the squadron
first started as a Bombing Squadron in 1929.
"Felix The Cat" is one of the longest serving squadron
insignia in the US Navy.

The white tails of the aircraft were the squadron's carrier
identification colour during their service aboard the USS Saratoga.