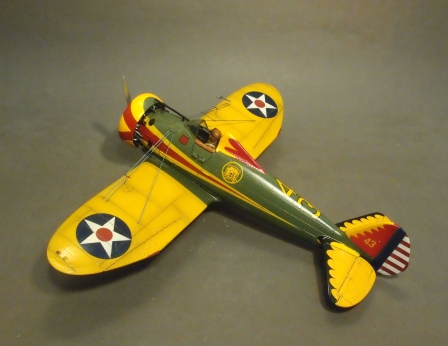 The 73rd Pursuit Squadron
was one of the three squadrons of the 17th Pursuit Group at this time.
Their colour scheme applied red and yellow fuselage stripes,
fin, tail, and head rest scallops and wheel trims.
They also followed the practice of the 34th Pursuit Squadron
of displaying the squadron number on the fuselage belly and aircraft number on the fuselage upper decking.
Radio equipment was still limited during this period,
and many aircraft did not have the aerial wires and antennas.
These were often reserved for squadron and flight commanders only.