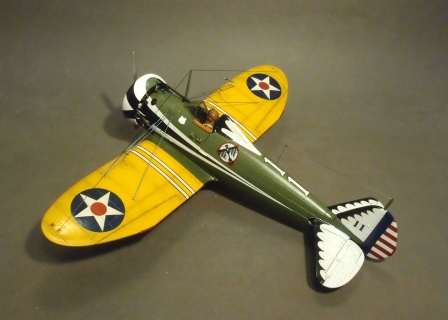 The Interwar Aviation series covers aircraft
that were developed and used between World War 1 and World War 2,
and was known as the "Golden Age of Aviation."

In the two decades between the end of World War 1 and the start of World War 2,
military aviation underwent a complete transformation.
The typical combat aircraft of 1918 was a fabric-covered
externally braced biplane with fixed landing gear and open cockpits.
Few aero engines developed as much as 250 horsepower,
and top speeds of 200 km (120 miles) per hour were exceptional.
By 1939 the first-line combat aircraft
of the major powers were all-metal monoplanes with retractable landing gear.

The Boeing P-26 was the first all-metal monoplane mass-produced for the USAAC.
The prototype first flew in 1932,
and orders were placed for 136 aircraft.
The initial order was delivered in June 1934 and,
although it had only a short service life,
it was to become one of the best known aircraft of the pre-war era.

All P-26 aircraft were withdrawn from front line service when WW2 began,
for the USA in 1941.
However some remained in service with the governments of Panama and the Philipines.
One P-26 is credited with shooting down the first Japanese aircraft during attacks on the islands.
A small number of aircraft were sold to Guatemala and these were still in service there in 1955.