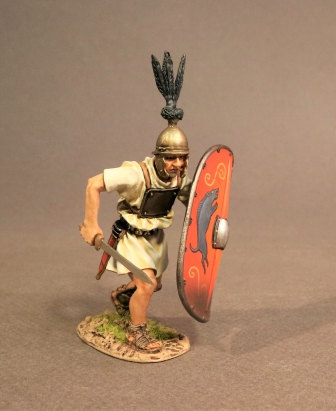 
The Roman Republic was the era of classical Roman civilization
beginning with the overthrow of the Roman Kingdom,
traditionally dated to 509 BC,
and ending in 27 BC with the establishment of the Roman Empire.
It was during this period that Rome's control
expanded from the city's immediate surroundings to hegemony
over the entire Mediterranean world.

Hastati (singular: Hastatus) were a class of infantry employed
in the armies of the early and Mid Roman Republic.
They were originally some of the poorest men in the legion,
and could afford only modest equipment.
Later, the hastati contained the younger men rather than just the poorer,
(though most men of their age were relatively poor.)
Their usual position was the first battle line.
The hastati were formed into 10 maniples of 120 men each,
therefore 1,200 men per legion.
Battles were conducted in a similar fashion;
the velites would gather at the front and fling javelins
to cover the advance of the hastati.
If the hastati failed to break the enemy,
they would fall back on the principes.
If the principes could not break the enemy,
they would retire behind the triarii, who would then engage.