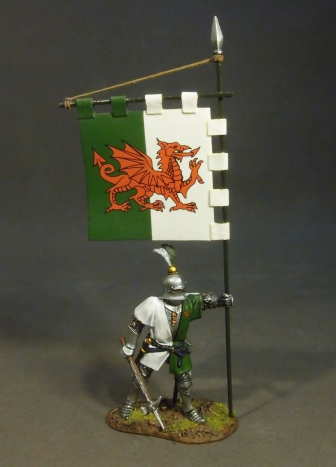 The third type was known as a standard,
and was a long swallow tailed style.

A few of the key personalities involved
in King Richard’s heroic last charge will be available in the summer.

King Richard III and his standard bearer,
Sir Percival Thirlwall, charge towards Henry Tudor and his standard bearer William Brandon.
King Richard III (2 October 1452 – 22 August 1485)
was King of England from 1483 until his death in 1485,
at the age of 32, in the Battle of Bosworth Field.
He was the last king of the House of York and the last of the Plantagenet dynasty.
His defeat at Bosworth Field,
the last decisive battle of the Wars of the Roses,
marked the end of the Middle Ages in England.

When his brother King Edward IV died in April 1483,
Richard was named Lord Protector of the realm for Edward's son and successor,
the 12-year-old Edward V.
As the young king travelled to London from Ludlow,
Richard met and escorted him to lodgings in the Tower of London,
where Edward V's own brother Richard of Shrewsbury joined him shortly afterwards.
Arrangements were made for Edward's coronation on 22 June 1483;
but, before the young king could be crowned,
his father's marriage to his mother Elizabeth Woodville was declared invalid,
making their children illegitimate and ineligible for the throne. On 25 June,
an assembly of Lords and commoners endorsed the claims.
The following day, Richard III began his reign,
and he was crowned on 6 July 1483.
The young princes were not seen in public after August,
and accusations circulated that the boys had been murdered on Richard's orders,
giving rise to the legend of the Princes in the Tower.

There were two major rebellions against Richard.
The first, in October 1483,
was led by staunch allies of Edward IV and Richard's former ally,
Henry Stafford, 2nd Duke of Buckingham;
but the revolt collapsed.
In August 1485, Henry Tudor and his uncle,
Jasper Tudor, led a second rebellion.
Henry Tudor landed in southern Wales
with a small contingent of French troops
and marched through his birthplace, Pembrokeshire, recruiting soldiers.
Henry's force engaged Richard's army and
defeated it at the Battle of Bosworth Field in Leicestershire.
Richard was struck down in the conflict,
making him the last English king to die in battle
on home soil and the first since Harold II
was killed at the Battle of Hastings in 1066.
Henry then ascended to the throne as Henry VII.

After the battle Richard's corpse
was taken to Leicester and buried without pomp.
His original tomb monument is believed
to have been removed during the Reformation,
and his remains were lost for more than five centuries,
believed to have been thrown into the River Soar.
In 2012, an archaeological excavation
was commissioned by the Richard III Society
on a city council car park on the site once occupied by Greyfriars Priory Church.
The University of Leicester identified the skeleton
found in the excavation as that of Richard III
as a result of radiocarbon dating,
comparison with contemporary reports of his appearance,
and comparison of his mitochondrial DNA with that of
two matrilineal descendants of Richard III's eldest sister, Anne of York.
Richard's remains were reburied in Leicester Cathedral on 26 March 2015.