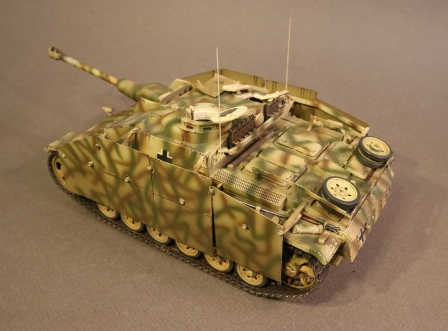 The iconic Sturmgeschütz III (Assault Gun) was conceived by none other than Field Marshal Erich von Manstein.
Created by mating an armored casemate to a Panzer III chassis,
the StuG III was intended to support infantry forces with direct fire.
Originally armed with a short barrel, low velocity 75mm cannon,
it served admirably in this role. However,
following German encounters with the heavily armored Russian T-34, KV-1 and KV-2,
in 1942 the StuG III was modified to mount the powerful long barreled, high velocity 75mm StuK40/L48 cannon.
With this heavier armament,
the StuG III shifted roles to that of a tank destroyer, where its powerful cannon,
heavy armor, and low silhouette made it a deadly opponent for Allied armor.

The most prolific model StuG was the Ausf G,
with 7,720 produced from December 1942 until March 1945.
It remained in service due to it's reliability,
excellent combat performance, and inexpensive cost.
In 1944, a StuG III cost 82,500 Rechsmarks to produce.
In contrast, the Panther cost 117,100 Reichsmarks and a Tiger 250,800 Reichmarks.
The StuG III served on all fronts, and even after the introduction of more advanced tanks by the Allies,
the StuG III's 75mm cannon and 80mm of armor protection still proved a deadly combination,
especially when used in ambush positions.
By wars end, thousands of Allied tanks fell victim to the StuG III.

The Sturmgeschütz III (Assault Gun)
was one of the most deadly German armored fighting vehicles of the Second World War.
Although originally designed as an infantry support weapon,
by 1944 its primary role had shifted to tank destroyer.
It proved a deadly opponent to Allied armor,
especially on the Western Front against the British and Americans.
Its powerful high velocity 75mm StuK40/L48 cannon was able to destroy British and American armor
with ease while it's 80mm armor protection proved difficult to defeat by the short barrel,
low velocity 75mm cannon mounted on the majority of Allied Sherman tanks in France.
Furthermore, its low silhouette made it difficult to spot,
making it an ideal ambush weapon that blunted many Allied assaults.


The GA-21 model represents a STUG of the 1.
SS-Panzer Division "Leibstandarte SS Adolf Hitler"during the Battle of Normandy.
Nicknamed "Hitler's Fire Brigade",
the soldiers of the LSSAH proved tenacious fighters and
were routinely shuttled from one crisis point to another where they could always be found in the most critical fighting.
When Operation OVERLORD occurred on June 6th, 1944,
the LSSAH was still reconstituting in Belgium following horrendous casualties sustained in Russia during late 1943.
Initially held as a German reserve,
the LSSAH made its way to Normandy in early July and fought first against the British,
where Hitler's bodyguard unit was instrumental in stopping Montgomery's Operation GOODWOOD offensive.
Later, following the U.S. breakout of Operation COBRA,
it fought against the Americans during Operation LÜTTICH,
Hitler's last panzer offensive in France.
Although it fought tenaciously,
LSSAH was unable to halt the Allies,
and was eventually surrounded and virtually annihilated in the Falaise Pocket,
where it suffered horrendous casualties and lost the majority of its armor and heavy weapons.


Stug #212 of 1. SS-Panzer Division LSSAH was produced by
Alkett and possesses later design features of the production series.
These include an "acorn"style cannon muzzle brake,
shell deflector for the front of the commander's cupola,
and cast "Topfblende" gun mantlet (commonly referred to as a "Saukopf" mantlet
because its shape resembled a pig's head)
that provided superior ballistic protection from the earlier rectangular version.
Finally, it is painted in a messy field applied tri-camo camouflage scheme and shows five white kill rings on the barrel,
representing a veteran "ace" of the LSSAH Stug Abteilung.


While Stug #212 is meant to serve as an LSSAH vehicle,
the SS division insignia was intentionally left off the model in order to maximize its usability for collectors.
As depicted,Stug #212 will also work for numerous other Waffen SS and regular Heer (German Army) units including Panzer Divisions,
Panzergrenadier Divisions,
and Independent Stug Brigades from late 1943 until the end of the war.

Please note this model has all four opening rear hatches with interior details.