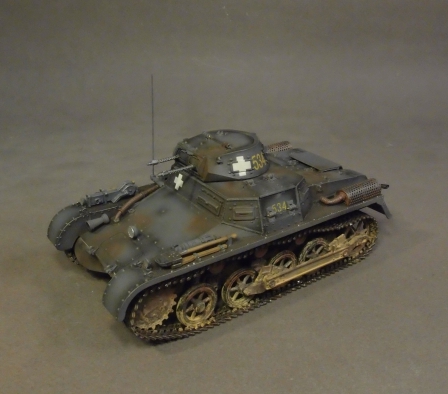 The invasion was swift and the last Polish pockets of resistance surrendered on 6 October.
The entire campaign had lasted five weeks
and the success of Germany's tanks in the campaign
was summed up in response to Hitler on 5 September:
when asked if it had been the dive bombers
who destroyed a Polish artillery regiment,
Guderian replied, "No, our panzers!"

The 4th Panzer Division, as part of the XVI.
Armeekorps, was one  of the first divisions of Heeresgruppe Süd
(Army Group South) to cross the Polish border on September 1st, 1939.
It fought against Polish cavalry at the Battle of Mokra
and was the first German unit to reach Warsaw.
It suffered heavy casualties in its initial direct assault
to take the city and in subsequent attempts
to take the city fighting alongside the Liebstandarte SS Adolf Hitler Regiment.
Later it fought in the Battle of the Bazura (Battle of Kutno),
the largest battle of the Polish campaign.

After Poland, the division fought
against the British Expeditionary Force during the Battle of France
and then on the Eastern Front for the remainder of the war.


PLEASE NOTE FIGURES WILL BE AVAILABLE AT A LATER DATE.