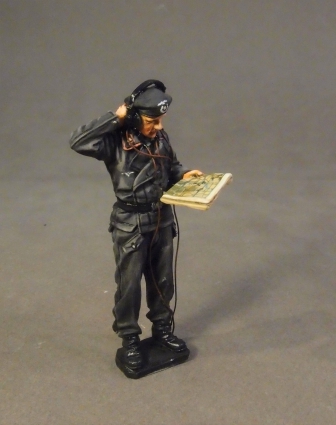 The Panzer I was a light tank produced in Germany in the 1930s.
The name is short for the German Panzerkampfwagen I
("armored fighting vehicle mark I"), abbreviated PzKpfw I.
The tank's official German ordnance inventory designation was SdKfz 101
("special purpose vehicle 101").

Design of the Panzer I began in 1932 and mass production began in 1934.
Intended only as a training tank to introduce
the concept of armored warfare to the German Army,
the Panzer I saw combat in Spain during theÂ Spanish Civil War,
in PolandFrance, the Soviet Union and North Africa during the Second World War,
and in China during the Second Sino-Japanese War.
Experiences with the Panzer I during the Spanish Civil War helped
shape the German Panzerwaffes' invasion of Poland in 1939 andÂ France in 1940.
By 1941, the Panzer I chassis design
was used as the basis of tank destroyers and assault guns.
There were attempts to upgrade the Panzer I throughout its service history,
including by foreign nations, to extend the design's lifespan.
It continued to serve in the Spanish Armed Forces until 1954.

Lesson learned from the Panzerkampfwagen I provided the German designers
and manufacturers with valuable experience in designing
and producing the next generation of new panzers that were soon to come.
Although, Panzerkampfwagen I was not a truly valuable combat tank,
it proved to be an excellent training tank
and most of the panzer crews were trained on Panzerkampfwagen I
until the end of the war or operated it in combat as their first armoured vehicle.