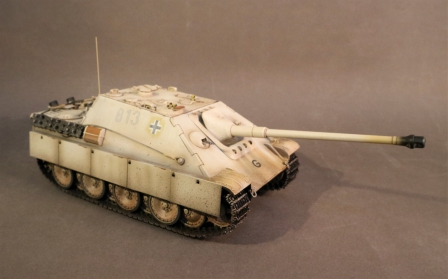 
The Jagdpanther ("hunting panther") was a tank destroyer
built by Nazi Germany duringÂ World War II based on the chassis of the Panther tank.
It entered service in 1944
during the later stages of the war on the Eastern and Western Fronts.
The Jagdpanther combined theÂ 8.8 cm KwK 43 cannon of the Tiger II
and the characteristically excellent armor
and suspension of the Panther chassis.

Mounting the deadly 8.8 cm PaK 43/3 L/71 cannon
and protected by well-sloped 80 mm frontal armor,
the Jagdpanther proved its worth as the most fearsome German tank destroyer of the war.
Although too few were produced to affect the outcome of the war,
the Jagdpanther represented an ideal blend of lethality,
armor protection,
and mobility that could destroy any allied tank with ease.

The Jagdpanther Ausf G2 was the final production variant of the deadly "Hunting Panther."
It differed from the earlier Jagdpanther Ausf G1 by using the engine configuration of the Panther G.
The other main difference was the relocation of external tool stowage
from the sides of the vehicle to the engine deck and rear hull.
This tool arrangement was recommended by schwere PanzerjÃ¤ger Abteilung 654,
based on their experience in Normandy,
and adopted for production.

This model represents a Jagdpanther Ausf G2 of the 2.
SS-Panzer Division "Das Reich".
Late in the war, German industry could not keep pace with
the tremendous losses of armor suffered by the Wehrmacht during the Battle of France,
Operation Bagration on the Eastern Front,
and the Battle of the Bulge.
Consequently, tank destroyers like the Jagdpanther and Hetzer were often issued
instead of tanks to Panzer Divisions late in the war.
Das Reich was issued Jagpanthers in early February 1945
while it was refitting following the Battle of the Bulge.
It used them in the 8.
Kompanie of its Panzer Regiment during Operation "Spring Awakening" ,
the last major panzer offensive of the war around Lake Balaton in Hungary.
Das Reich continued to employ Jagdpanthers on the Eastern Front
until its eventual surrender to the U.S. Army in May of 1945.

The Das Reich Jagdpanther Ausf G2 comes in winter whitewash
with a primer red interior and displays many late production modifications
including a raised crew compartment heater over the left engine cooling exhaust fan,
sliding plates over the right side air intakes to regulate radiator temperatures,
and flame suppressing exhausts (Flammenvernichter).
Its markings also include a stylized "G"
on the front glacis plate and rear hull sides.
This marking was evident on many Jagdpanthers and other panzers
during this time frame and meant the vehicle had been treated
with the winter antifreeze solution Glysantin.
Prominently displayed,
the Glysantin "G" alerted crews not to add the summer coolant Akorol,
lest catastrophic engine damage occur.