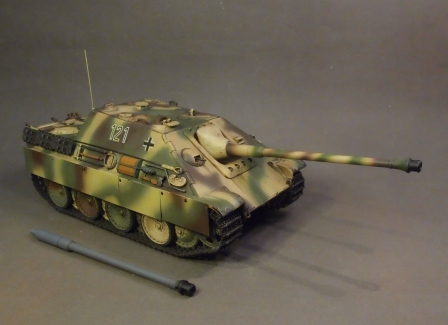 
The Jagdpanther ( "hunting panther") was a tank destroyer built
by Nazi Germany during World War II based on the chassis of the Panther tank.
It entered service in 1944 during the later stages of the war on the Eastern and Western Fronts.
The Jagdpanther combined the 8.8 cm KwK 43 cannon of the Tiger II
and the characteristically excellent armor and suspension of the Panther chassis Mounting the deadly
8.8 cm PaK 43/3 L/71 cannon and protected by well-sloped 80 mm frontal armor,
the Jagdpanther proved its worth as the most fearsome German tank destroyer of the war.
Although too few were produced to affect the outcome of the war,
the Jagdpanther represented an ideal blend of lethality, armor protection,
and mobility that could destroy any allied tank with ease.

The GA-01(121) Jagdpanther is painted in a factory tri-camo pattern
and features the choice of cannon barrel painted in factory heat resistant grey lacquer, or tri-camo.
During WW2, German tank cannon barrels were delivered to the tank factories
and to combat units finished in both grey and Dunkelgelb (dark yellow) heat resistant lacquer.


While the Jagdpanther's markings are historically accurate for numerous Jagdpanther units,
this model is meant to represent a Jagdpanther from schwere Panzerjäger-Abteilung 560 (Heavy Tank Destroyer Battalion 560).
This German Heer (Army) unit was originally armed with Nashorn tank destroyers but converted to a mixed unit composed of one company of Jagdpanthers
and two companies of Jagdpanzer IV L/70 tank destroyers in preparation for the Battle of the Bulge.
It was attached to the 12.
SS-Panzer Division "Hitlerjugend "and fought with this famous division in the final German offensives
against the allies on both the West and East Fronts.
First, against the Americans during the Battle of the Bulge
and later in 1945 against the Russians during Operation Spring Awakening,
the offensive near Lake Balaton in Hungary meant to relieve the siege of Budapest.