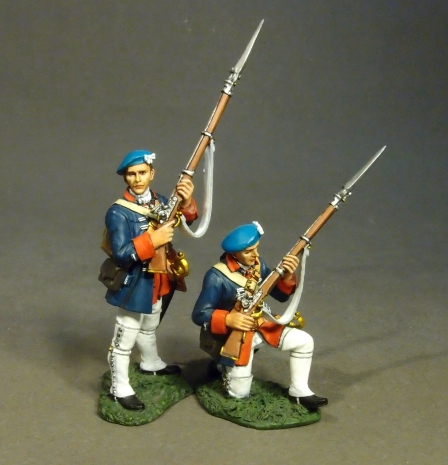 The Royal Ecossais was raised by John Drummond in 1744 and disbanded 1763.

Their organisation was to be based on that of the Irish regiments ,
to be made up of 11 companies of fusiliers and 1 of grenadiers each of 50 men plus officers for a total of 660 effectives.
The officers and men used to form the regiment came from several different sources,
firstly from Scotsmen serving in the Irish regiments,
Scottish exiles living in France together with recruits smuggled out of Scotland.
With an effective of 500 men and officers assembled at St.Omer,
with John Lord Drummond as lieutenant colonel,
(as for all Royal Regiments, the King of France was always the colonel )
although Lord Drummond wrote on the 29th December 1744
that he was missing only 10 men to complete the regiment.

This regiment, as many other foreign regiments in tjhe French Army were not mercenaries as is often claimed,
they were more often than not political or religious refugees
who could not safely return to their homeland for fear of persecution.

The regiment had a strength of 350 men at the Battle of Culloden on the16th of April 1746
were they were in the second line and later they helped to cover the retreat of the Highlanders right wing,
an attempt by Argyll Militia to interfere was pushed aside
but in the skirmish the two battalions became separated and one , probably the 2nd battalion,
was caught and surrounded by British Dragoons and forced to surrender in Inverness,
the other one, together with their colours continued its retreat
towards Ruthven Barracks and did not surrender until the 19th of April.