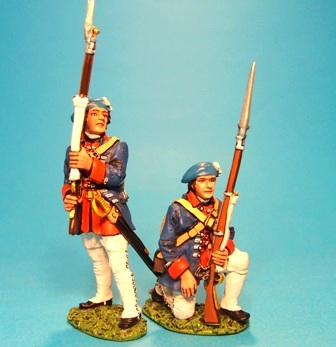 
The Royal Ecossais was raised in 1744
and discharged in 1752.
Their officers were Scots and Irish,
often exiled Jacobites,
and the soldiers were of many European nationalities,
including Scots, Irish and English.
The regiment was raised by Lord John Drummond
and was a regiment of Scots mercenaries in French service.

The French supported Prince Charles Edward Stewart
and supplied troops which were sent to
Scotland to support the rebellion.
The French ship L'Esperance'
was captured by the Royal Navy on 25 November 1745,
it was on her way to Scotland
to support the Jacobite Rebellion.
Only 300 French troops were to arrive in Scotland,
and were present at the Battle of Culloden.