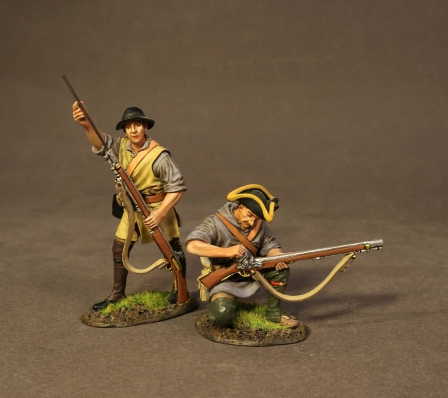 These figures can be used for theÂ Battle of Oriskany,
fought on August 6, 1777,
which was one of the bloodiest battles in the North American theater of
theÂ American Revolutionary War and a significant engagement of the Saratoga campaign.
An American party trying to relieve the siege of Fort Stanwix
was ambushed by a party of Loyalists
and allies of several Native American tribes, primarily Iroquois.
This was one of the few battles in the war in which
almost all of the participants were North American:
Loyalists and allied Indians fought against Patriots and allied Oneida in the absence of British regular soldiers.

Early in the siege of Fort Stanwix,
an American relief force from the Mohawk Valley under General Nicholas Herkimer,
numbering around 800 men of the Tryon County militia,
and a party of Oneida warriors,
approached in an attempt to raise the siege.
British commander Barry St. Leger authorized an intercept force
consisting of a Hanau JÃ¤ger (light infantry) detachment,
Sir John Johnson's King's Royal Regiment of New York,
Indian allies from the Six Nations,
particularly Mohawk and Seneca;
and other tribes to the north and west,
and Indian Department Rangers, totaling at least 450 men.

The Loyalist and Indian force ambushed Herkimer's force
in a small valley about six miles (10 km) east of Fort Stanwix,
near the present-day village of Oriskany, New York.
During the battle, Herkimer was mortally wounded.
The battle cost the Patriots approximately 450 casualties,
while the Loyalists and Indians lost approximately 150 dead and wounded.
The result of the battle remains ambiguous.
The apparent Loyalist victory was significantly affected by a sortie from Fort Stanwix
in which the Loyalist camps were sacked,
spoiling morale among the allied Indians.