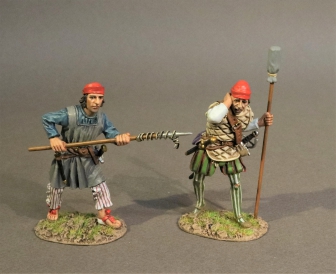 From the moment of Christopher Columbus'
discovery of lands previously unknown to Europe in 1492,
the New World captured the imagination of European adventurers.
Thousands of men came to the New World to seek fortune, glory,
and land. For two centuries,
these men explored the New World,
conquering any native people they came across
in the name of the King of Spain (and the hope of gold).
They came to be known as the Conquistadors.

The Spanish were known to have had four falconets
and ten brass lombards with them when they first landed in 1519.
Spanish gunners had a poor reputation,
and crews were mainly made up of seamen, and a mix of foreigners from Italy, Netherlands and Portugal.