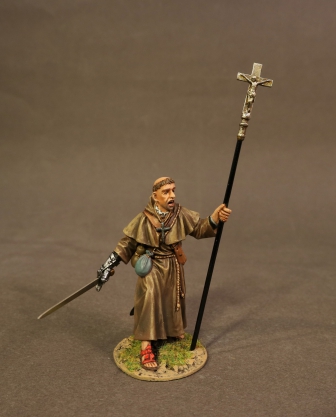 Conquistadors claimed that they were attacking the New World natives
in order to spread Christianity and save the natives from damnation.
Many of the conquistadors were,
indeed, religious men,
but history has shown that the conquistadors
were far more interested in gold and loot.

From the moment that the first Horse was put ashore in November 1493,
horses were the key to Spanish success in the Americas.
They gave the Spanish not just distinct
tactical and logistical advantages,
but a moral advantage as well,
because the native Americans had never seen such creatures before,
and were initially scared to death of them.

At first the Aztecs thought that each cavalryman
and his horse were one supernatural creature,
with 4 legs, 2 arms and 2 heads!
They were so relieved when they discovered that the horse was just an animal
like any other that when the first one was killed ,
it was cut up and portions circulated
throughout their lands, to demonstrate that such creatures were mortal.
It is therefore no wonder that horses
captured by
the Aztecs were sacrificed as if they were human,
and their heads ended up alongside those of Spanish soldiers on the temple racks!